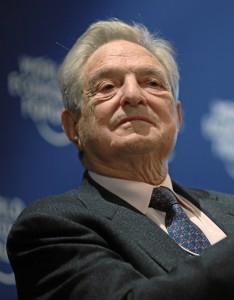 George Soros is a well known trader who is much better known as “The Man who broke Bank Of England” because of his US$1 billion profit trade during the 1992 Black Wednesday UK currency crises.

Soros started his career in 1956 as an arbitrage trader for F. M. Mayer later moved to Wertheim & Co. as an analyst. After working at the top positions with companies like  Arnhold and S. Bleichroeder and First Eagle funds, in 1970 Soros founded Soros Fund Management and became its chairman.

“I’m only rich because I know when I’m wrong.”

“Once we realize that imperfect understanding is the human condition there is no shame in being wrong, only in failing to correct our mistakes.”

“It is much easier to put existing resources to better use, than to develop resources where they do not exist”

“Stock market bubbles don’t grow out of thin air. They have a solid basis in reality, but reality as distorted by a misconception.”

“Markets can influence the events that they anticipate”

“The Man who broke the Bank of England”

You can buy books from the Amazon links mentioned above.

“Our total position by Black Wednesday had to be worth almost $10 billion. We planned to sell more than that. In fact, when Norman Lamont [the British finance minister] said just before the devaluation that he would borrow nearly $15 billion to defend sterling, we were amused because that was about how much we wanted to sell.”