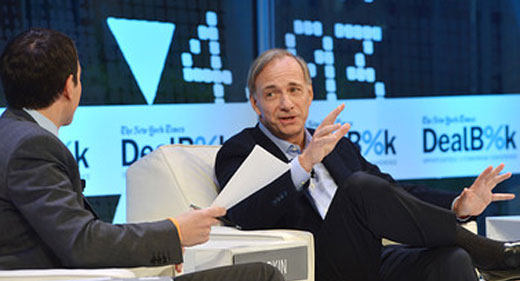 Ray Dalio is a self made billionaire who is worth more than $15 billion (Some 90,000 crores rupees). He is the founder and Co-Chief Investment Officer of Bridgewater Associates, a privately held company and yes the world`s biggest hedge fund firm, managing approximately $150 billion in global investments.

He founded Bridgewater out of a two-bedroom apartment when he was 26 years old in 1975. Bridgewater follows macro economic trends, data, and market behavior to come up with ideas about how to profit off the movement of stocks, bonds, and currencies all over the world.

Ray runs the firm according to the doctrine of what he calls “radical truth & transparency” where everything is recorded & taped. He believes that the success for any business lies with the culture and the values people share with each other and that they can strive for excellence only through truth, independent thinking & transparency.

“The pain of problems is a call to find solutions rather than a reason for unhappiness and inaction, so it’s silly, pointless, and harmful to be upset at the problems and choices that come at you.”

In both 2010 and 2011, Bridgewater ranked as the largest and best-performing hedge fund manager in the world

In both 2012 and 2013, Bridgewater was recognized for having earned its clients more than any other hedge fund in the history of the industry.

In 2012, Dalio appeared on the annual Time100 list of the 100 most influential people in the world.

How the Economic Machine Works by Ray Dalio (In 30 Minutes)

Check out employee of Bridgewater sharing their views about the culture here.