YesBank leads the Bank Nifty Index, while HDFC Bank drags the Index most since 2013 Bull Market.

The article illustrates the performance of the BankNifty Index & stocks in 2014 since the cyclical bull market reversal of August 2013.

To get detailed information on the BankNifty Index, its components, performance & milestones in the past, please read the article: What is BankNifty Index & How to trade BankNifty? 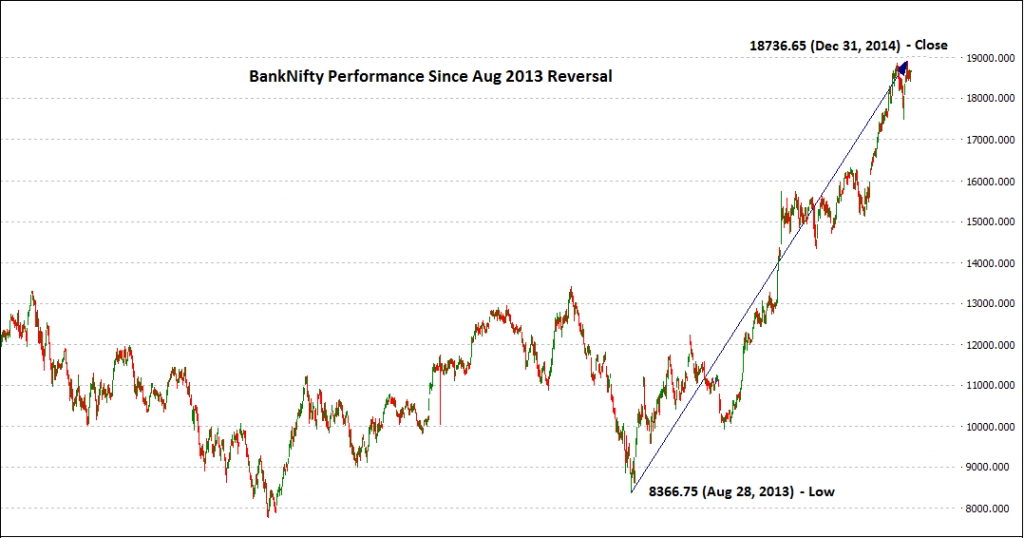 BankNifty Index after witnessing a sharp correction in the mid 2013 reversed very sharply in the month of August 2013 to start a new bull market and still continuing  to set new records with intermediate corrections in between. From the chart above, we can see that the rally started in the end of August 2013 from a low price of 8366.75 to close the year 2014 at 18736.65 registering a total return of 124% in just 16 months.

Technically speaking, the index continued to make higher tops and higher bottoms and topped out in the month of May 2014 on the day of the election results when BJP government came in then the market sets in for a breather for few time and continued to go up to settle the year 2014 at 18736.65. 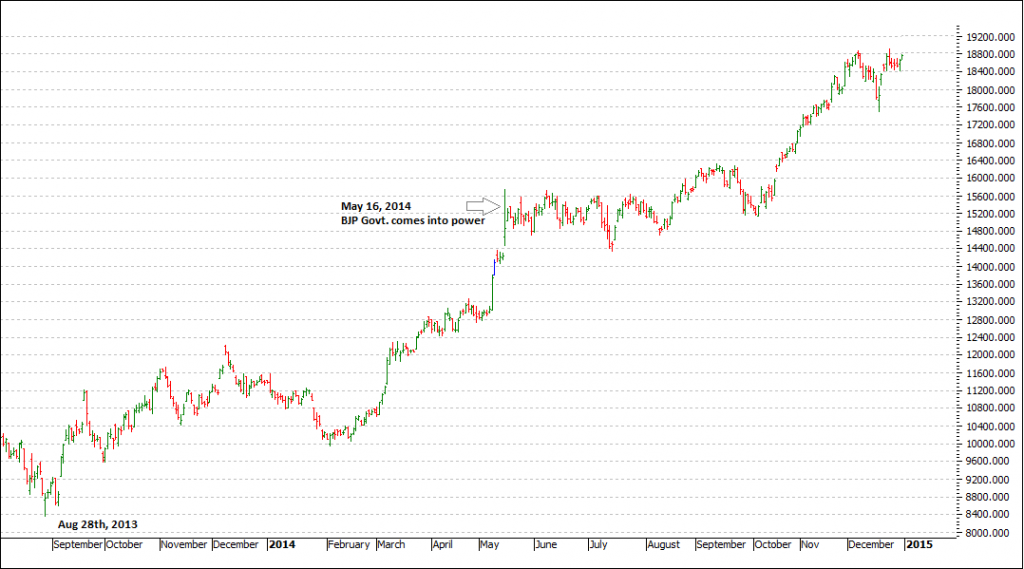 The bull market reversal from Aug 2013 was majorly supported by the performance of the some banks where two stocks even rallied approximately by more than 200% in these 16 months. Out of twelve banking stocks in the CNX Bank Nifty Index, only three stocks underperformed the bank nifty return while the rest nine stocks outperformed the index. (Refer Table – I)

Yes Bank crowned as the strongest stock in the BankNifty Index since the beginning of bull market started in later 2013. Even after witnessing the biggest crash of 60% in just 3.5 months in mid 2013 the stock outperformed the bank index & stocks by registering a return of 257.27% Vs 124% return of Bank Index.

While, on the other hand, the weakest stock in the bank nifty index since this 2013 bull market has been HDFC Bank which under-performed the Index & stocks by registering a return of only 80.23% Vs 124% return of Bank Index.

From the Table-I, we can witness that:-

* Comparison in the report is done only for the stocks in BankNifty Index
* * Return is evaluated on the basis of the Low price of BankNifty Index & Stocks (Spot Market) in Aug/Sept 2013 Vs the close price as on Dec 31st 2014.